Missy and Jessica are thrilled to announce that they have renewed their sponsorship with County Saddles!  Both ladies have ridden in County Saddles for years, and with the addition of County's new line of jumping saddles, the Ransehousen's are excited to be fitting the event horses in these custom saddles as well.

One of Missy's younger horses is a tough fit, and it has been a struggle to keep Dee Dee comfortable while in work.  Patti Gillen, our local Pennsylvania County Saddle fitter has gone way above the call of duty to custom fit Dee Dee in the new Solution Monoflap.  We are very excited about the arrival of that new saddle and even more excited about the renewal of this long term relationship!

"County Saddlery is so pleased to have the dynamic team of Missy and Jessica Ransenhousen back in our saddles! For years we have admired their program at Blue Hill Farm and we are looking forward to being part of the team that keeps their horses happy and their clients achieving their goals." 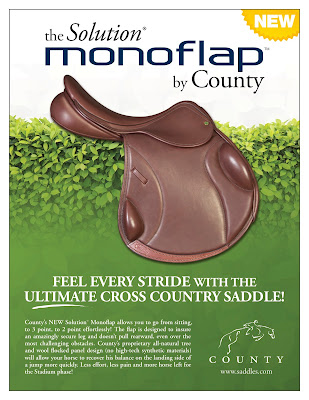 With a seat that allows you to go from a sitting position to 3 point to 2 point effortlessly and a flap that provides an amazingly secure leg and doesn't pull rearward over even the most challenging obstacles. And of course featuring County's amazing all natural tree and panel designs which allow your horse to recover his balance quicker on the landing side of a jump. Less effort, less pain and more horse left for stadium.

Nothing to lose, everything to gain, get your horse out of pain !
Take a Test Ride! - http://www.countysaddlery.com/
Posted by Lisa Thomas at 12:04 PM No comments:

It feels like the eventing season has officially kicked off in Florida, with a busy weekend at the Ocala Horse Park for the entire team at Blue Hill Farm South!!

There are several people training with Missy while in Ocala, who are from different regions in the US, so the result is a fun crew who joins BHF for the winter.   Peter Berk, who is from Connecticut, has Prince in training with Missy, and Chrissy Hollnagee is a friend from Willow Run in Wisconsin, brought her mare Bella.  Of course Jess Pye, David, Madeline, and Meghan Lynn round out the group of regulars with a few others like our para riders Gigi & Laurieta who are shipping down for training and showing stints.


Divisions filled at the Ocala Horse Park, and those who got in had a great weekend.  Jess Pye and DJ romped around the Prelim to a fantastic 3rd place finish, Missy took Jason Racey's Dodger in the Intermediate and had an unfortunate stumble a a combination, costing them a run out....but otherwise would have been up in the top 5.  Brigitte had only one rail and finished a very respectable 7th in a Prelim division packed with top professionals.  Peter Berk's Prince had a blooper in stadium but also finished middle of the pack and our friend Chrissy Hollnagle and Bellagio won their Open Novice division!

Here's a few videos from the weekend too.  Sorry some are a bit blurry, but still fun to watch!

Next up Rocking Horse!!

Feature Article on Megan Lynn and the Elevate Event Team on Eventing Nation!

We recently introduced you to the newly formed Elevate Event Team, bearing big goals and dreams and making those dreams a reality in the form of a Danish Warmblood named The Natural E, or Leo for short. Here is the next blog in their journey as the team heads to Ocala for the winter. You can catch up on previous blogs by clicking here.

The days sure fly by when you are having the time of your life! It seemed like just yesterday that Megan and I were walking the novice course at Hagyard Midsouth Three-Day Event and Team Horse Trials.

Once again, the Natural E (Leo) put in the best dressage test of the entire competition, earning a 21.8. His inexperience showed on the cross-country course when he stopped at the scary looking “spider fence,” but after some reassurance from Megan that the spider was not going to leap off the fence and bite him, he jumped it with oceans of room to spare.

You could see him thinking, “I will jump it if you say so, Mom, but I am going to be sure I jump high enough so that spider can’t get us!” The team galloped confidently off and went clean over the rest of the course.

Leo had no problem navigating the stadium course and finished the day in 13th. He got lots of pats and peppermints as we all celebrated the end of our first season.
Since we knew Leo was headed to Ocala in January, he only got a few weeks off in November and then it was back to work. The wet weather meant lots of time in the indoor working on dressage and jumping grids.

Just before Christmas, Jessica Ransehousen visited Reese Koffler-Stanfield’s Maplecrest Farm. Leo and Megan hauled over for several lessons. We all laughed at what Jessica dubbed Leo’s “Hawaiian hula dance” as Megan worked on keeping him straight down the quarter and center lines.
He is so sensitive to her leg that the slightest touch would cause him to shift his haunches one way or the other. Use your seat to hold him straight, look up and keep your legs very steady — those were the goals of the session. Over the next two days Megan got the “hula” under control!

Christmas followed quickly. Santa was good to Megan and Leo, leaving them perhaps the biggest stocking I have ever seen, full of treats and toys.

On the wet winter days that led up to their departure for sunny Ocala, Leo would help Megan set courses for her students and keep her company in the arena while she taught. No lead shank necessary, he was content to follow Megan wherever she went, checking out her pockets for treats, playing with her coat, her hair, or whatever he could get his lips on. They certainly have a special bond.

Leo and Megan departed for Blue Hill South in Ocala on January 18th. The caravan of horse trailers loaded with horses, equipment, feed, supplements and hay rolled out before light.
Thank goodness they left town just before the big snow storm hit. I headed down two weeks later to groom for Megan at their first show of the season, Rocking Horse Winter 1 Horse Trials. Leo took to Florida like a duck to water.

He loved his new pasture mate, Biggin (Rock Hard Attitude), and was relaxed and happy in the airy open barn at Blue Hill. He settled into his new routine right away.

When Megan is in Florida taking care of and riding 4 to 7 horses per day, plus helping out as needed around Blue Hill South, it’s a full-time job. She starts at 7 a.m. and finishes up 12 hours later, but she thrives on it.

READ THE FULL ARTICLE ON EVENTING NATION......
Posted by Lisa Thomas at 7:18 AM No comments: