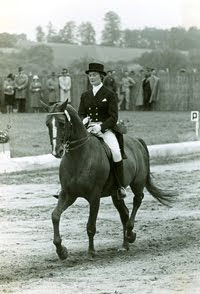 January 3, 2010 -- For more than five decades, the name of Jessica Newberry Ransehousen has been synonymous with the United States dressage program. And, after a lifetime spent as a high performance international medalist, lead dressage coach for the U.S. program, highly-skilled dressage judge and widely-respected ambassador for the sport of dressage, the United States Equestrian Federation (USEF) has selected Ransehousen as the winner of the USEF’s highest individual honor--the USEF Lifetime Achievement Award and the Jimmy A. Williams Trophy.

From her start as a dressage rider, Ransehousen has known the taste of success. In 1956 and 1957, she earned the title of the United States Equestrian Team’s National Dressage Champion. But, this was only the beginning for this multi-talented equestrian.
Read full article compliments of Equisearch.
Posted by Lisa Thomas at 4:57 PM No comments: