Last weekend a whole crew of Blue Hill Farm riders and supporters traveled to NYC to help Gigi, Cindy, Brian and Bethany celebrate the inclusion of their wonderful documentary, A Fork In The Road, in the EQUUS Film Festival.  It was a wonderful event and opportunity for our crew to get out of the barn to go celebrate the release of this great documentary!

A note of thanks from Gigi:

"Thanks to Jean Good, Charlotte McIntosh, Kate Moore, Jean and I arrived at the MIST Theater in Harlem in high style, alighting from our own limousine! 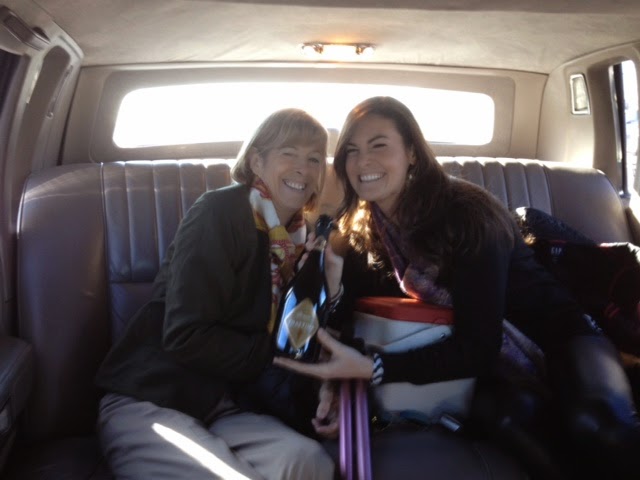 Through the bustling lobby, our first stop was the group shot in front of the Equus Film Festival banner! I was so proud to stand there with producer, Cindy Connors, and cinematographers, Brian Troy and Bethany Ditnes, as well as the Blue Hill Gang including Jean Good, Kate Moore, Lisa Thomas and Lauren Sara and, of course, my daughter, Charlotte! 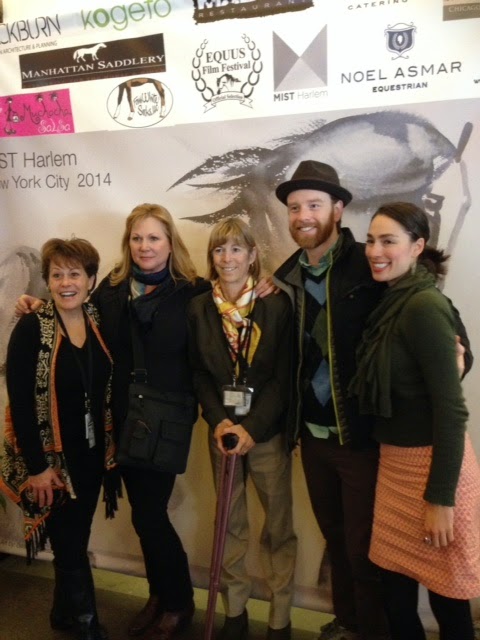 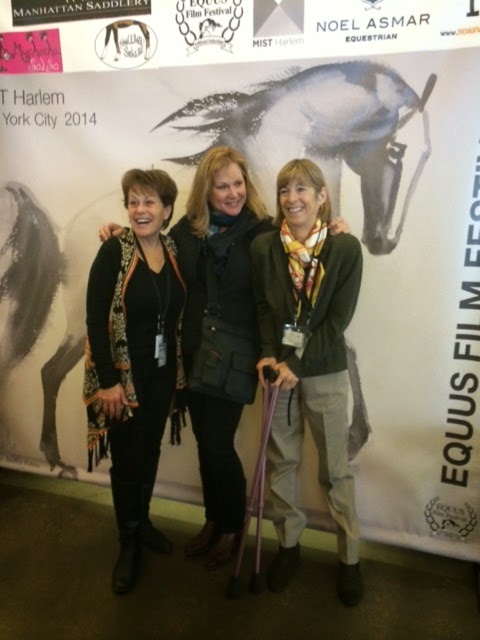 I felt such a warm rush of affection for my friends as they appeared on the big screen, such a long way from Unionville!  A raucous dinner at the Red Rooster in Harlem concluded the celebration!"

Gigi would also like to thank the following group of individuals and businesses who have recently contributed to her competition fund through either donations of financial support, time or services.  Without this group effort Gigi and the team at Blue Hill Farm would not be able to help her reach her dream of qualifying for the Paralympic Team.  Here's wishing everyone a relaxing and Happy Thanksgiving!

Blue Hill Farm is very happy to have a wonderful friend, vet and holistic equine specialist in our midst!  Bonnie Kibbie (wife of course builder extraordinaire Jeff Kibbie) has started her own business and we are big supporters of her competence and ability to provide the best in equine care.  We are so fortunate to have she and Jeff living back in the area! 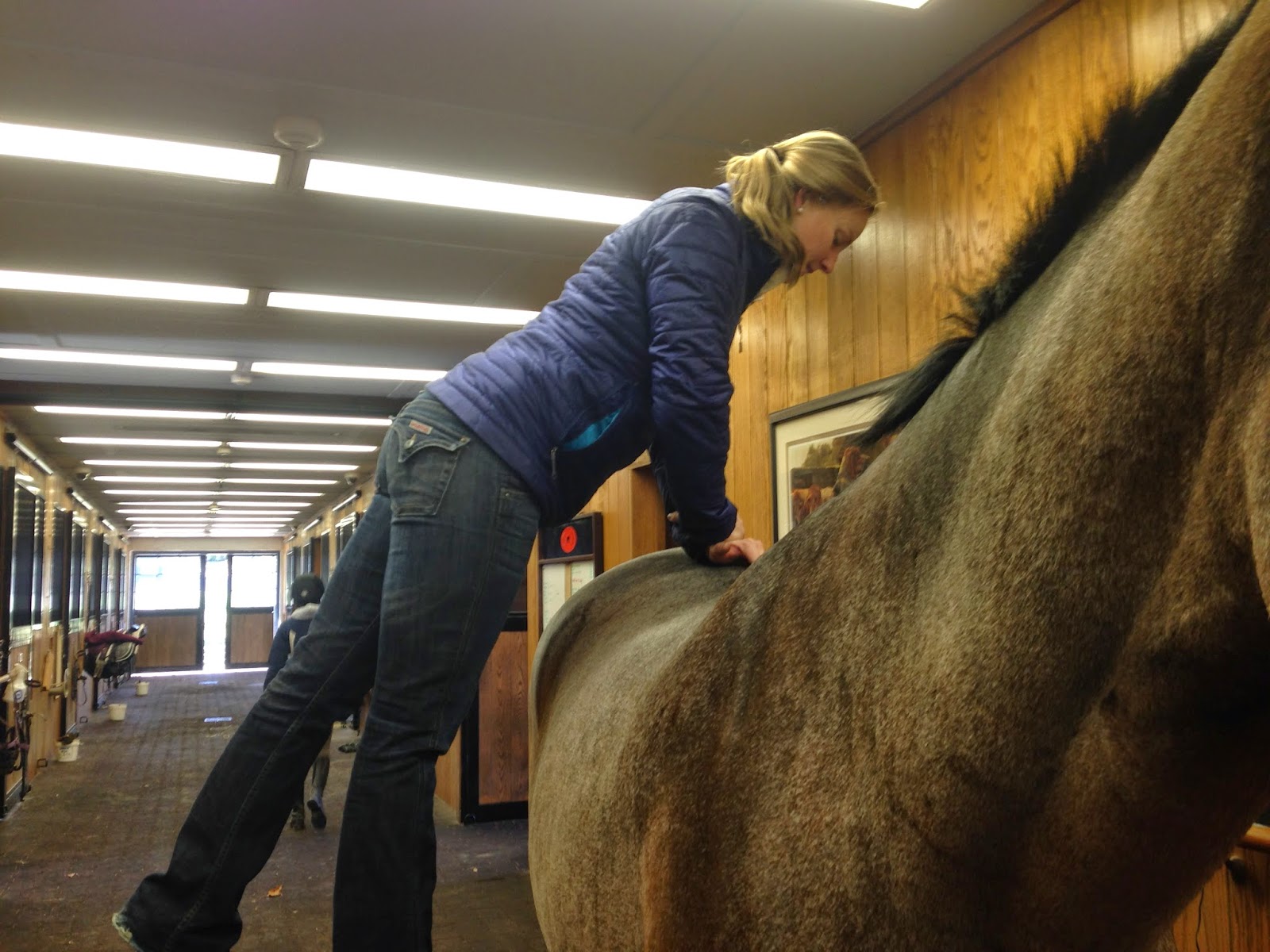 Here is a bit of background information on Bonnie and her newly founded business!

" I did my undergraduate studies at Washington and Lee University in Lexington, Virginia, before moving to the Philadelphia area to attend the University of Pennsylvania for veterinary school.  As a fourth year veterinary student I spent time in Fort Collins, Colorado, where I became certified in veterinary medical acupuncture through the OneHealth SIM program and Colorado State University.

After graduation from vet school I completed an internship at Tennessee Equine Hospital outside of Nashville, Tennessee.  During my internship I was impressed with how much chiropractic care seemed to help the patients my practice saw, and I decided to become certified myself.  I obtained my chiropractic certification through the International Veterinary Chiropractic Association (IVCA), after completing the program of study at Options for Animals College of Animal Chiropractic.

Upon completion of my internship, I accepted a position at John R. Steele and Associates and returned to the southeastern Pennsylvania area.  The sport horses I saw during my time in Tennessee and with Dr. Steele’s practice, combined with my experience with my own horses in the eventing community, reaffirmed my belief in the importance of the chiropractic and acupuncture work I was doing, and ultimately led to my decision to open my own practice, Balanced Care Equine."

Balanced Care Equine offers chiropractic care and acupuncture services, and is in the process of expanding to full traditional care, including dentistry.  You can learn more about her practice by visiting her website: www.balancedcareequine.com, or on her Facebook page: Balanced Care Equine.
Posted by Lisa Thomas at 1:14 PM No comments:

Not long ago Cindy Connors, producer of Gigi's documentary, A Fork In The Road, started baking treats for her horse Barney, and they were such a hit when she shared them with friends, she and Lauren Sara decided to turn "Barney's Balls" into a small business that could also do some good for the horse community. 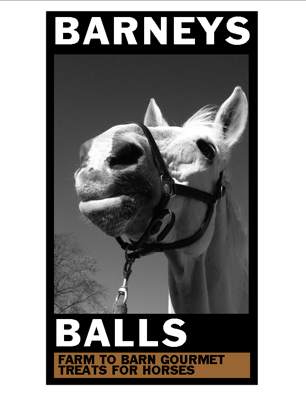 "Cindy and I are good friends and have been riding together for years," said Lauren. "We were inspired by two top athletes, Silva Martin & Margaret “Gigi” Macintosh, whom each faced life threatening/career ending riding accidents. Yet through sheer grit and determination, each recovered and is back competing on an international stage. We are donating a portion of the proceeds from “Barneys Balls” to the US Para Equestrian Association (USPEA), in support of Gigi’s quest for a place on the 2016 Paralympic Team, as well as helping Silva’s favorite cause, LOVE YOUR BRAIN. It’s our small way of treating our horses and in turn giving back." 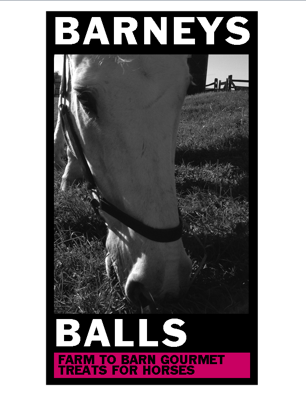 You can learn more about Gigi’s road back by watching “Fork in the Road”, a short documentary Cindy produced in the fall of 2014 and which is now making the rounds at film festivals.
Link: [Fork in the Road]

Starting this week, one and two-pound bags of Barney’s Balls will be in stock at Embreeville Mill Feed Store in Coatesville, PA and at our website, www.barneysballs.com. 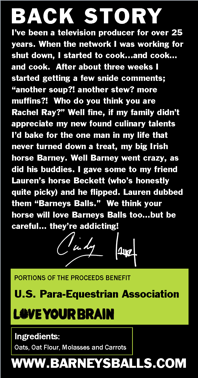 Posted by Lisa Thomas at 8:24 AM No comments:

Gigi is delighted to report that her very moving mini-documentary, The Fork in the Road, has been chosen for screening at the Equus Film Festival on Friday, November 21, 2014 at 2:30 at Theater B. in New York City!! 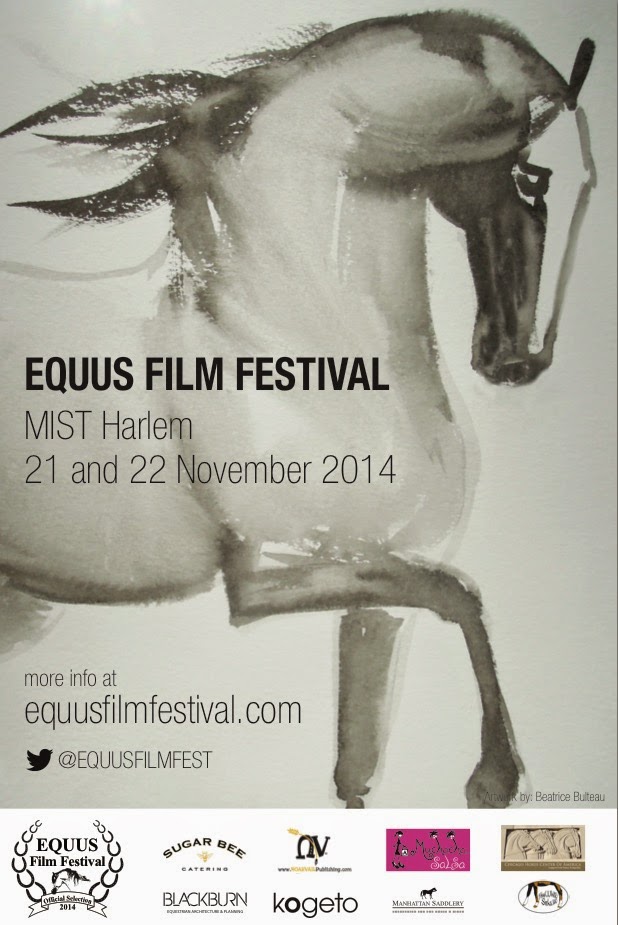 If you haven't had the pleasure of viewing this amazing documentary, please take the time to watch!  It is under 15 minutes in length, but gives such insight into the human determination and spirit of our friend Gigi McIntosh.

We will be scheduling local viewings and fund raising parties in the region in the near future!

Fork in the Road

Posted by Lisa Thomas at 9:29 AM No comments: