Becca Gets Some Good Karma from EN! 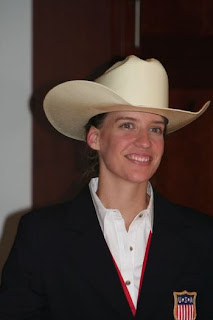 I have total "WEGitus"....it creeps up on your slowly and then finally one becomes completely consumed with nothing else but getting to Ky!!

I was just out on Eventing Nation & noticed this great picture of Becca & a note of good luck from Samantha.  I hope everyone is having a great time & see you on Thursday!

http://eventingnation.com/home/2010/09/samantha-clarks-opening-weekend-report.html
Posted by Lisa Thomas at 9:27 AM No comments:

THE FINAL COUNTDOWN TO WEG! 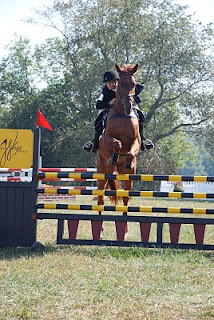 We’re in the final moments leading up to our riders’ departure for WEG, and the barn is buzzing with excitement and anticipation for both James’ and Becca’s departure this week. I had a moment to visit them this Sunday after Missy’s solid 3rd place finish on Fantastik (pictured) this weekend at Plantation Field.

James will be leaving with his horse Orlando (Ben in the barn) on Saturday the 25th, to make his solo mission down to Kentucky. Unfortunately he will be riding just as an individual for his home country of Ireland, as his fellow rider, Eilish Burn on Youri had to withdraw her horse due to recent minor strain. James is now feeling a bit of a dis-advantage because he won’t be able to ride the team test prior to his individual, but he has been in front of 3 of the judges in Canada & at the American trials.....so his confidence is strong. 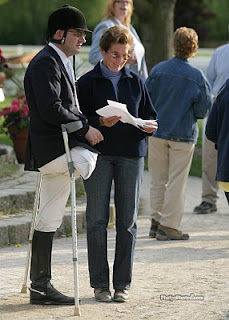 The highlight of James’ season came originally in March when he did his first CDI able bodied test in Palm Beach, where he placed a very respectable 12th out of 30 or so horses. In addition, this summer at Windreach International CPEDI 3* in Toronto, he won the overall Championships & scored a 76 on his freestyle! James’ last competition was August 11th at Morven park, where he did his individual championship test (scoring a 72) & his freestyle test (scoring a 71). He made one noted mistake by forgetting his second simple change, so as he says, “I have to wake up” in preparation for the games. At home, James has continued his daily lessons with Jess & has been practicing the test to improve his half passes & the fluidness of the finer points and movements.

Once they arrive in Kentucky, Ben will be staying with Reese K. Stanfield at Maple Crest Farm in Georgetown, Ky. Reese is a Grand Prix dressage rider herself and placed in the top 5 last year at the Championships at Gladstone & her sister Lindsay has been a longtime student of Jessica’s.

James’ dutiful groom this year at WEG will also be Kerri Sowers, who has been very involved with BHF through the generous loan of her long time partner, Kazan, to Becca Hart for this year’s USEF Para Championships. 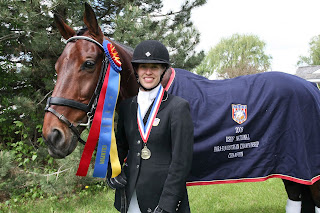 This summer was a great one for Becca, winning the USEF National Para Champion on Kazan & USEF National Reserve Champion on Pippin (Norteassa). Kazan, owned by Kerri Sowers of Egg Harbor City NJ, competed Kazan in the Young Riders at PSG (about 9 years ago) and then progressed to the Intermediare II level. He’s been in & out of semi retirement for the past 5 years due to Kerri’s hectic schedule as a Physical Therapist and her dutiful commitment to helping out the riders at BHF. In addition Kerri is also busy bringing along her next young horse to follow in Kazan’s footsteps!

Becca is also gearing up for her big trip down south by continuing her training with Missy at home. In preparation for the WEG, Becca is in lessons 6 days a week on Pippin, remaining focused on her consistency, flow and increased brilliance with bringing Pippin’s poll up and out.

A big thank you goes out to Becca’s partial sponsor, Starbucks Corporation, in Kennett Square. They have given her a flexible schedule which has allowed Becca to focus on the games, and they are helping her fulfill her financial obligations required to make her way to Kentucky!!! She and Becca will be leaving on Wednesday the 22nd, driving straight through to the Kentucky Equine Research Center, who has generously sponsored the US Para Team and provides their four legged partners with stabling up until they move over to the equestrian center.

Let’s also not forget another key person on the team, her groom Alex Philpin, who is a long time friend of Missy's, has groomed professionally for years and has accompanied Becca to the World Championships and Hong Kong in the past.

Best of luck to both these extremely talented riders. We are proud of everyone involved here at Blue Hill Farm & we promise to keep in touch with regular updates reporting live from the WEG!!!
Posted by Lisa Thomas at 11:57 AM No comments: