Imported KWPN, 2003, 16.1hh, liver chestnut gelding by Houston out of a Flemmingh mare.

A stunning competition horse, with solid dressage training, plenty of experience at 1st level at schooling shows and good technique over fences.
An absolute pleasure to ride and handle, hacks alone or in company.

Woody has " low mileage" due to owner's transfer to the US from England for work.
He is fit, healthy and ready to have lots of fun with a new owner who wants to do some combined training and show jumping!

Here's a recent video of Woody jump schooling at home!

After competing abroad, Margaret "Gigi" McIntosh is one step closer to entering the 2016 Paralympics.
McIntosh, 60, of Cumru Township broke her neck in 1999 while competing in an equestrian event.

The accident left her paralyzed from the chest down and ended her career as a rider.

But a friend helped her get back in the saddle, and now, after years of training, she is striving to qualify for the Paralympics in Rio de Janeiro.

In April, McIntosh and her horse, Rio Rio, traveled to Waregem, Belgium, to compete in the International Para-Equestrian Dressage Competition. She placed second in the freestyle, individual and team categories.

"It was very successful," she said.

Then she competed in the May Market Horse Show in Manheim, Germany. The competitions there were unusually noisy because able-bodied competitors were competing and practicing nearby, McIntosh said.

"They had jumpers practicing and the upper level able-bodied dressage horses, as well," she said.

It's unusual because most places try to keep the paraequestrian horses away from distractions that could get them excited. McIntosh found the extra challenge exciting, and competition was already fierce.

"Parariding has been established in Europe for such a long time," she said. "In the U.S., maybe two or three or four people are in the same category, but in Europe there's easily anywhere from five to 10 in each category. It's a lot more competitive."

In Germany, McIntosh placed third in freestyle, fifth in individual and fifth in the team test category.

She wanted to compete in these shows to make a name for herself in the para-dressage world. She feels she did. After competitions she heard many compliments from judges about Rio and how she and Rio were a lovely pair.

When she wasn't competing, McIntosh made the most of traveling through Europe, spontaneously stopping when she saw a neat cafe or taking in cultural or historical sites.

"We saw some really neat stuff, including Waterloo," she said.

This year is the 200th anniversary of the Battle of Waterloo, the battle in Belgium where French military leader and Emperor Napoleon Bonaparte was defeated on June 18, 1815.

She also qualified for the October USEF Para-Equestrian Dressage National Championship in Texas. There are two more qualifying competitions in Florida in January.

McIntosh said her success so far is thanks in part to Rachel Gross, Rio's groom, and Jessica and Missy Ransehousen, her coaches.

"I'm very excited," McIntosh said. "But we have a long way to go until we actually get to (Brazil) for the Paralympics."

Fork In The Road To Be Featured At 2015 Equus International Film Festival Missoula, Montana! 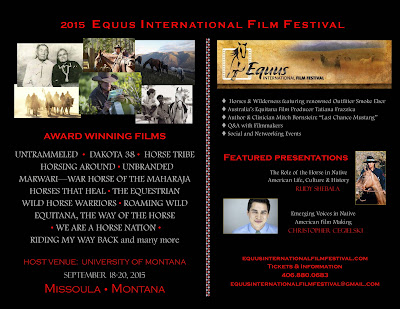 We are delighted that Gigi's documentary, Fork in the Road,  has been chosen as an official selection of the 2015 Equus International Film Festival in Missoula, MT from September 18-20, 2015.

While the focus of this year's festival is on the relationship of horses to Native Americans, Janet Rose, Director/Founder of EEIIF wrote, "Your story is inspiring and heartfelt!  You give hope to many.  We are honored to share it."
Many thanks again to Cindy Connors and Brian Troy, the producer/writer and cinematographer, and the cast and crew at Blue Hill Farm and Chesterland for making this moving documentary!


Link to Festival Schedule.  Fork In The Road will be featured on Saturday!

Fork In The Road

Learn more about Gigi through her website at Paraquest.net and consider supporting her bid for the US Paralympic team!

Posted by Lisa Thomas at 5:29 AM No comments: