A Long Overdue Thank You to BHF! 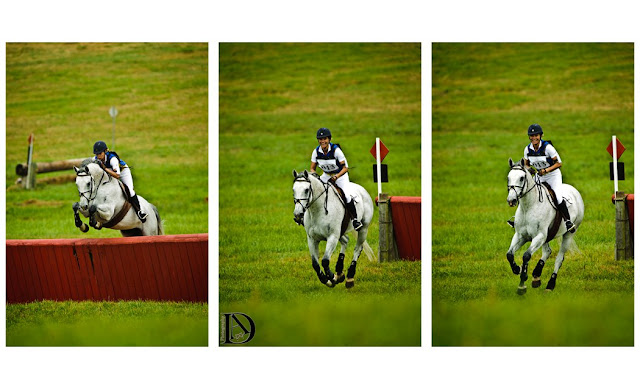 So, this blogger is long overdue for publishing my BIG THANK YOU to the whole crew at BHF.  The real reason for the delay is that I wanted Amy Dragoo to give me her blessing that I could publish this great series of photos that she took at Plantation Field, at the Weldon Wall, which seemed to have me quite intimidated!  Note the huge smile after landing!!

Rhythm, otherwise known as "Fatty" in the barn, went to Missy and crew for a little bootcamp & a solid 2 weeks on the muzzle, so he could live down his nickname.  He finished up his bootcamp with a szvelt new body and a 2nd at Plantation in the Training Division.  Our consistency in training has gone back to watching my daughter ride around in circles on her 12h pony, but we do try to throw in a good dressage & stadium school at least once a week.

The whole crew at BHF is just the tops!  The girls all work so hard, and the karma at that barn between Missy, Jess and clients is 2nd to none!  I only wish that we could have stayed longer, but there will be opportunities in the near future.  I'm really looking forward to the beginning of the school year, when my kids get on the bus at 8am & I get to hit the road to Unionville again!  Yeeeehaaaaa!  LT
Posted by Lisa Thomas at 6:54 PM No comments: 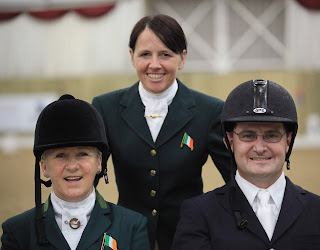 James, pictured here with fellow Irish team mates, Rosemary Gaffney(sitting) and Angela Lyons(Standing) both Grade IV riders.  The other photo is the whole team with Team Trainer Donie McNamara and their Chef, Naomi Donoghue.
Fresh off his return from the CPEDI3* at Hartpury College, England, James has sent the following update:
"It was very successful trip for myself and the Irish team with 10 teams competing and nearly 70 riders in total at the show. (www.hartpury.ac.uk/dressage).  My team from Ireland had 9 riders there, and I rode on the team along side Rosemary Gaffney (Grade IV), Eilish Byrne (Grade II), Helen Kearney (Grade IA).  As a team we were 2nd to Great Britain and Canada was 3rd.
Wed July 13th was the team test where I was the first of the Irish riders to go in the morning and 3rd of the Grade IV riders to enter the ring.  I scored a 68.21%, which kept me in the lead until the last rider (who was my team mate Rosemary) scored a 68.37%!  The final result for  the Grade IV team test put Ireland in first and second, with the Sophie Wells, the WEG  Gold medalist placing 3rd.
On Thursday evening the 14th the table turned in the Grade IV Individual Championship test.  I rode at 8:06pm and made some mistakes which put me in 3rd place with a 67.26%,  Rosemary took 2nd and Sophie came out on top.  Friday July 15th was the Freestyle test, where we rode late again.  Sophie Wells won with a 73.2% and I was 2nd with 71.2% and Rosemary was 3rd with a 71.1%.
Overall it was a very successful show where I had the opportunity to ride with my country's home team and to get in front of our coaching team.  In the early fall I hope to travel to Saugerties, NY for CPEDI3*, September 15th to 18th."
This coming weekend Missy, Becca, Elizabeth, Jess Brumfield and Rachel Gross are traveling to Morven Park for the Summer Fling dressage show!
Posted by Lisa Thomas at 6:53 PM No comments: