Reading, Penn. – June 3, 2015 – Margaret McIntosh of Reading , Penn. and her horse Rio Rio completed a successful European competition trip. McIntosh is the 2014 U.S. Para-Equestrian Dressage Reserve National Champion and a Grade Ia Para-Dressage athlete. McIntosh traveled to Waregem, Belgium April 24-26, 2015, to ride in the International Para-Equestrian Dressage Competition CPEDI3*. The event was held at the Bloso Sportcentrum “Gaverbeerk” in Waregem. McIntosh then traveled to Mannheim, Germany May 1-5, for the MaiMarkt ( May Market) Horse Show CPEDI3*. For McIntosh this European trip was an opportunity to showcase her horse Rio Rio in front of multiple FEI Para-Dressage judges. It was also a chance to gain show miles and expertise while riding against the best Para-Dressage athletes in the world. McIntosh earned her horse and rider combination Certificate of Capability for the 2016 U.S. Paralympic Equestrian Team Selection Trials while competing overseas. McIntosh was accompanied by her coach Missy Ransehousen who was the former U.S. Chef d’Equipe for the Para-Dressage Team.

Waregem was the first competition stop where McIntosh competed at the expansive grounds of the Waregem riding school. McIntosh and Rio Rio were consistent earning a second place finish in the Individual, Team, and Freestyle Tests. McIntosh took the judges remarks and headed over to Mannheim, Germany where the electrifying atmosphere of the large equestrian venue was no issue for the Rheinland Pfalz-Saar. The first day at Mannheim was cold and rainy for the Team Test and the duo completed a sluggish but correct Grade Ia Test. The second day McIntosh picked up the pace and earned a 70.1%. McIntosh maintained Rio Rio’s pace on the final day and earned a 74% third place finish in the Freestyle, behind World Equestrian Games’ medal winners Sara Morganti with an 80% and Elke Philips with a 75%.

McIntosh commented, “While Rio’s relaxed attitude can be an advantage, at the beginning of our tour we struggled with the judges requests for more energy and more activity. Missy Ransehousen, my coach and Rachel Gross, my warm-up rider, helped me channel the maximum amount of energy into her dressage tests.”

McIntosh concluded, “We accomplished our goal for the trip by showing the European judges that Rio Rio could be competitive with the best European horses, including medal winners from last year’s World Equestrian Games”

USPEA FULL ARTICLE HERE
Posted by Lisa Thomas at 7:33 AM No comments:

Eventers Honor Seema Sonnad with a Sea of Purple

Eventers at this past weekend’s Plantation Field Horse Trials donned purple to honor the memory of rider, owner, mentor and volunteer Seema Sonnad, who passed away suddenly last month. The event was made all the more emotional for Missy Ransehousen, who rode Seema’s OTTB, VS Pass Play, in the Open Preliminary division.

Seema, who boarded and trained with the Ransehousens at Blue Hill Farm in Unionville, Pennsylvania, had planned for “Keegan” to compete with Missy at both Fair Hill’s May horse trials and Plantation Field’s June horse trials to aid in her goal of competing in a one-star later this year.

“The funny part is that Seema had joked with me and told me that I needed to knock a few points off of his dressage score, and he scored a 28 this weekend; he usually scores in the high 30s, Missy said.

“Dressage is not his strongest phase, but he’s an excellent jumper. He did such a phenomenal job with Seema; he really took great care of her.”

Missy does not have any immediate plans to compete Keegan again, but she has enjoyed keeping him in work and seeing the outpouring of support and love for Seema at Plantation Field.

“It was really great to see people chipping in with the purple and having a good time,” she said. “I think any time that you ride a horse for someone who has passed away, it’s emotional in a sense that you want to fulfill what they felt the horse deserved.”

Plans are being made to plant a tree in Seema’s honor overlooking the cross country course at Plantation Field, a fitting tribute to someone who volunteered and competed at the venue for many years.

Chronicle of the Horse
By: Jasmine Wallace
All photos by Amy K. Dragoo


The eventing community came together on the weekend of June 6 to honor Seema Sonnad, an event rider, volunteer, mentor and beloved friend to many who passed away unexpectedly on May 27. Plantation Field Horse Trials (Pa.) invited everyone at their June Horse Trials to wear her favorite color, purple, in remembrance.

Organizers, staff, volunteers and competitors alike turned out in purple, and those that didn’t picked up a ribbon from the secretary’s office to wear. Eventers across the country joined in as well, sporting purple at their competitions over the weekend even if they weren’t at Plantation.
Sonnad brought her off-the-track Thoroughbred, VS Pass Play, from the beginner novice level to preliminary in the three years she’d had him. When she wasn’t competing, Sonnad could usually be spotted with sunglasses on and clipboard in hand, ready to help in whatever way was needed. Last weekend, volunteers came out in droves, honoring Seema’s memory by taking on the tasks that she did selflessly for years.

“She was always been willing to help because she knows that’s what keeps the wheel rolling,” said Denis Glaccum, the founder of Plantation Field Equestrian Events, Inc. “She symbolized the type of person that we need to attract to and keep involved in eventing if eventing is going to survive because you cannot do it without people willing to volunteer and take on whatever job.” 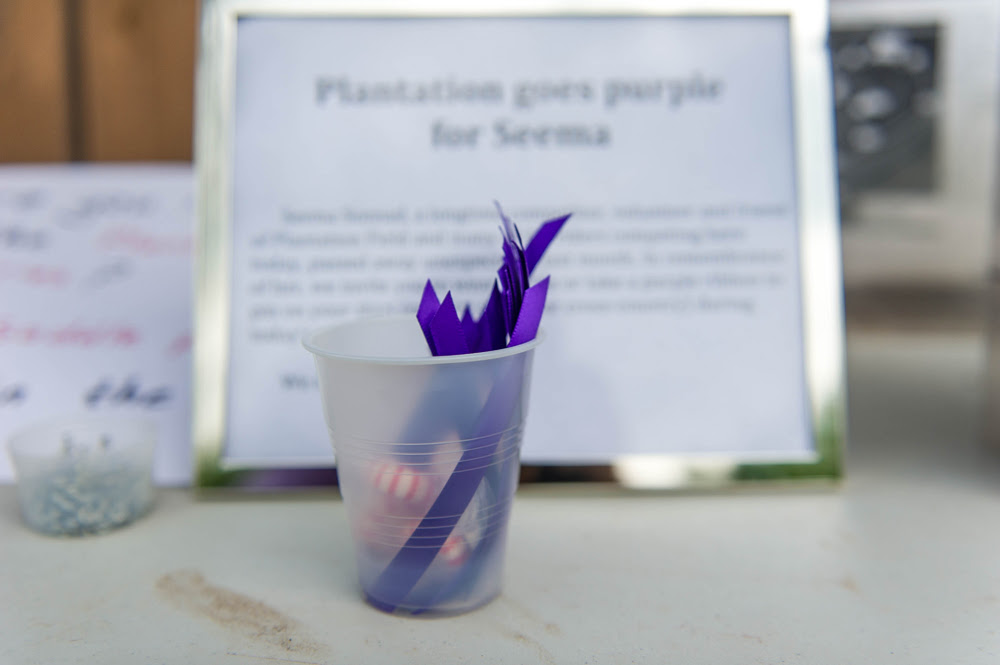 Cindy Gilbert volunteers at Plantation every year, but was joined by a even bigger group of people from her Harvest View Stables in Manheim, Pa., than usual.
“We loved to be able to do something to honor Seema,” said Gilbert, who had known Sonnad through her work at Plantation and at the Fair Hill International Horse Trials (Md.) as well as through their mutual trainer, Missy Ransehousen. “She was such a fixture in the eventing community and was always, if not on course, helping out at events. I thought that it was really great that this was a way that we could all show our support.” 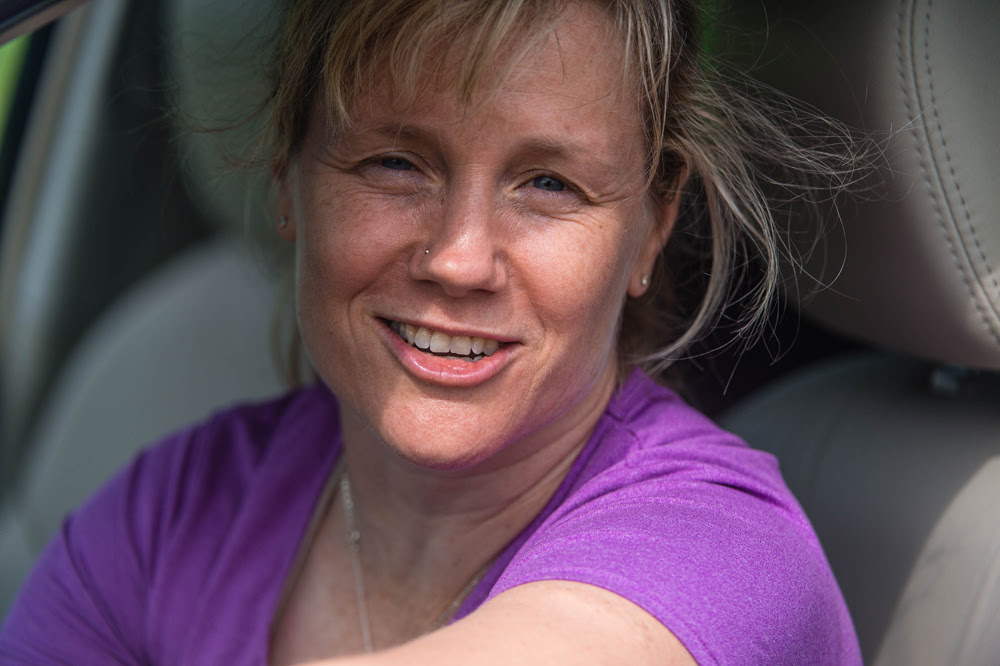 Missy Ransehousen, who trained Sonnad, rode Sonnad’s Thoroughbred gelding VS Pass Play, or “Keegan” in the open preliminary, division A on Saturday.

“I had planned to ride him; she and I had discussed the schedule before she had passed away,” said Ransehousen. ”It’s funny, when she first asked me to ride the horse, she was like, ‘Oh, well hopefully you can knock some points off of his dressage test.’ He’s a fabulous jumper, but he’s not always the best on the flat, and this weekend I did it for her. I got a 28 in dressage, so that was really special, and when I saw that score, I was like, ‘This is for you Seema, this is for you.’” 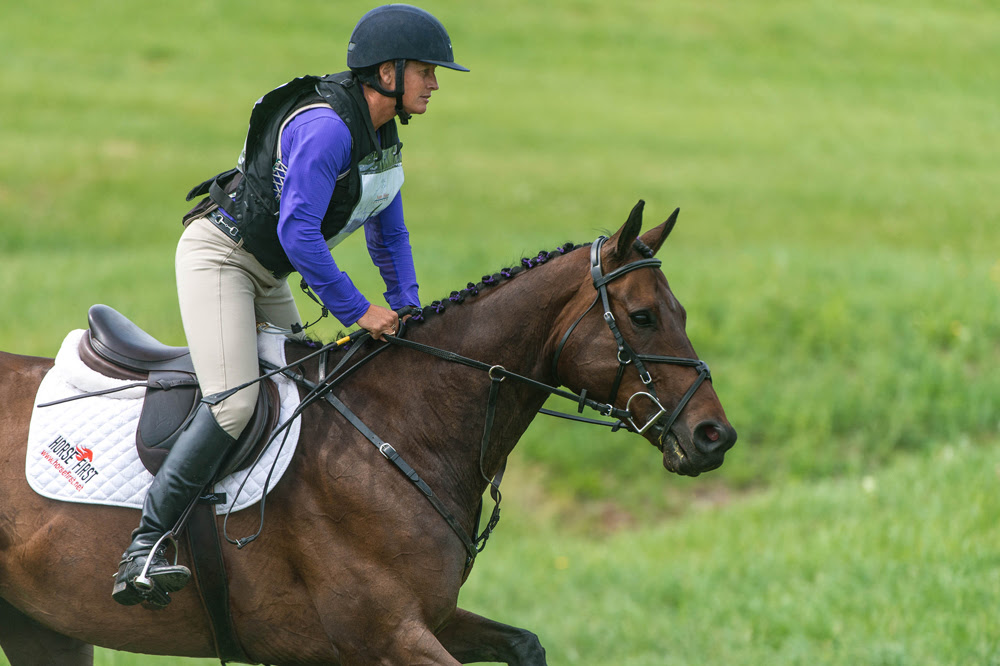 Missy Ransehousen on VS Pass Play at Plantation, wearing purple and with purple braids to honor late owner Seema Sonnad.

Ransehousen and a group of other riders who had been directly connected to Sonnad wore purple for all three phases while many other competitors changed into their purple attire for cross-country and show jumping. Gilbert, who volunteered as a cross-country fence judge last weekend, said that more than half of the riders that galloped past were also sporting Sonnad’s favorite color.

“Looking out into the field you saw a lot of purple, which was wonderful,” said Ransehousen. “It’s amazing how many lives Seema has touched and the following that she had with everyone dressed in purple to honor her.”

Posted by Lisa Thomas at 4:21 AM No comments: