Fork In The Road Featured At 2015 Equus International Film Festival in Missoula, MT! 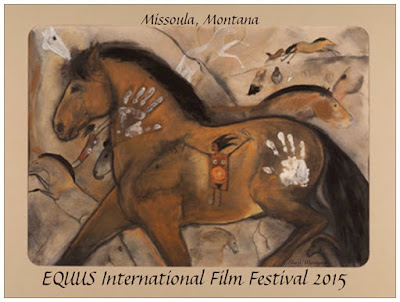 Margaret McIntosh (Gigi) is an international level Para-Equestrian who, prior to her accident, rode at the highest level of sport of Three Day Eventing.  During the 90‘s she was long listed for the Pan American team, and in 1998 she finished the prestigious Rolex Kentucky Four Star Three Day Event.

In the spring of 1999, Gigi was injured in a riding accident while competing, resulting in incomplete quadriplegia.  As a testament to Gigi’s grit and determination, she began a positive recovery, eventually getting back in the saddle to take on the sport of Para- Equestrian Dressage.  She began training at Blue Hill Farm with Missy & Jessica Ransehousen in 2010, competing upon Idalgo, a retired upper level event horse once competed by Buck Davidson and owned by good friend Jan Smith.

Looking forward to international para competition, Margaret purchased Rio Rio,  a lovely RPSI mare,  with the goal of competing with her at the 2014 World Equestrian Games in Normandy and ultimately the 2016 Paralympics in Rio de Janeiro. This pair had great success in 2014 in Wellington, FL and in European competition, earning the United States Para Equestrian Reserve National Champion Title. After a successful European tour this spring, Rio Rio and Margaret are currently in second place in the U.S. Paralympic ranking list for the 2016 games.
Fork In The Road is a compelling documentary about Gigi’s journey from International Event Rider to International Para-Equestrian.  The film features those who have been most influential in her career, including Bruce Davidson, Mary Hazzard, Jan Smith, Jane Cory and Missy and Jessica Ransehousen.

Many thanks to Cindy Connors and Brian Troy, the producer/writer and cinematographer, and the cast and crew at Blue Hill Farm and Bruce Davidson Eventing for making this moving documentary!
While the focus of this year's film festival is on the relationship of horses to Native Americans, Janet Rose, Director/Founder of EEIIF wrote about her choice to feature Gigi’s film,

"Your story is inspiring and heartfelt!  You give hope to so many.  We are honored to share it."
Gigi is equally as thrilled to be traveling to Montana with her husband to attend the 2015 Equus International Film Festival.

“Having spent a lot of time in Montana skiing, I have great friends in and very warm feelings towards the state! I am grateful to The Equus International Film Festival for the opportunity to show Fork in the Road to my dear friends from Missoula to Bozeman! My husband Brian and I will be at the University Center Theater on Saturday, September 19th at 5:00 PM for the official screening.”

Consider supporting Margaret “Gigi” McIntosh for her bid for the US Paralympic team!


Learn more about Gigi and the Para-Equestrian Sport at Paraquest.net
Posted by Lisa Thomas at 9:43 AM