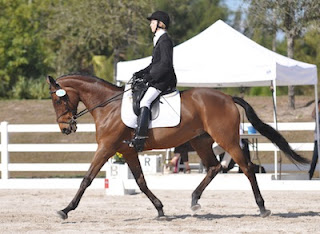 Gigi broke her neck in the spring of 1999 while riding in an event, resulting in incomplete quadriplegia.

Initially paralyzed from the chest down, she is eternally grateful for having the opportunity to regain her mobility!

Gigi had extensive riding experience before her accident:
1970-1976 Working student for May and Denny Emerson
1976-1979 Working student and barn manager for Gunnar Ostergaard and Ellin Dixon
1979-1983 Working student/groom George Theodorescu in Sassenberg, W. Germany
From 1987 through 1999 Gigi evented several lovely horses with lots of help from Bruce Davidson, culminating in completing the CCI*** and CCI**** at Rolex Kentucky 3-Day in 1997 and 1998!

Six months after her accident, she started to ride with Jane Cory, the owner of the Cort Center for Therapeutic Riding at Pleasant Hollow Farm in Pleasant Valley, PA.

She initially asked Missy and Jessica Ransehousen for help just before the WEG in 2010 and has been lucky enough to enjoy their expertise ever since. This past year has been a whirlwind of qualifications for the London 2012 selection trials, including successful trips at back-to-back CPEDI ***s in Wellington, FL, as well as shows at Morven Park and Dressage at Saratoga.

You can check out Gigi's bio on our website along with the slideshow from the Selection Trials!