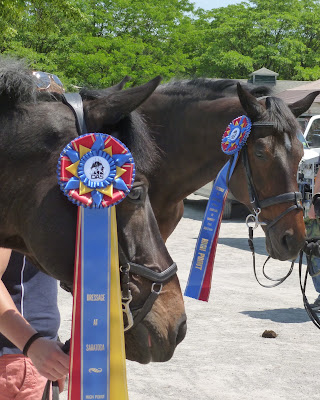 On the weekend of May 26-27, 2012, the Para-equestrians of Blue Hill Farm traveled to Saratoga Springs, N.Y. for the Dressage at Saratoga competition. This annual event has taken place for more than 20 years on the tree-lined back stretch of the famed Saratoga Race Course.

We were invited to this event by the show chairperson, Regina Cristo, who is kindly lending her horse, One Night Stand, to Elizabeth Pigott for the Paralympic selection trials to be held at Gladstone, N.J. from June 10-13. One Night Stand competed at the World Equestrian Games in 2010 with an Argentinean rider and most recently helped a Mexican rider qualify for the Paralympic Games. Elizabeth won third place with a 67.38%, in the Para-equestrian test on Sunday to the delighted cheers of the local crowd!
Rebecca Hart won honors as well with the High Score Para-equestrian at 70.4% and High Score Freestyle Test with 74.6% on Lord Lugar. Kim Jones on Ghlenlivet and Margaret (Gigi) McIntosh on Idalgo were second and third in the Para-equestrian Freestyle test.  Aboard Trudy Phillip's colorful skewbald Carlingford's JD, Gigi also won the High Score award at the Para-equestrian level 1b!

Of course, all their success is directly attributable to Missy Ransehousen's skills as a rider and coach and the tireless efforts of our ground crew, Rachel Gross, Jenn Cain, Danielle Lawrie and Charlotte McIntosh.