Gigi Looks Back On Rio!

Looking back over my notes from the first team conference call at the end of March when we were still at Cindy Torbeck's farm in Ocala, I find it hard to believe we actually made it to Rio! Through the dark days at the National Finals desperately doing the math to figure out if we still even had a chance to the final role calls in the #1 spot on the team to the Opening Ceremony, the depths of my emotional roller coaster made the high points even more satisfying. 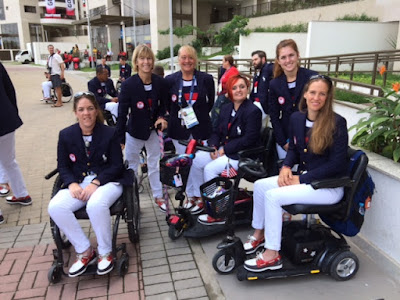 One of the most rewarding aspects of this Paralympic Games was the bond we developed as a team. We shared a three bedroom, three bathroom apartment in a nineteen story high rise in the village. We also shared the elevators with 300 USA teammates from all disciplines, truly a challenge at peak times. The main dining hall was a huge tent.  I mean like airline terminal huge! With an incredible variety of food from pizza and various hot dishes to abundant fruit and salad and delicious ice cream bars, everyone found something to eat and, remarkably, none of us suffered any ill effects!

We shared lots of giggles over our coordinated efforts at locomotion around the Village, two of us on one scooter and powered scooters towing the wheelchairs. Some efforts were more successful than others. The opening ceremony almost ended in a wreck but Annie swooped in to save me from a near-disaster caught on International TV!

We all cheered for each other's rides, owners, grooms and trainers sitting together as an American contingent replete with waving fłags.

My first ride in the Deodoro stadium was so exciting! I literally could not stop smiling! The venue looked like a huge expanse on TV but the small dressage ring was artfully surrounded by shrubbery delineating the competition area and assuaging my agoraphobia. The stadium was festively decorated with International flags, brightly colored blue and green seating, and abundant flowers all reinforcing the Rio carnival atmosphere. We took our time noting the landmarks that would help me keep my 8m circles regular. 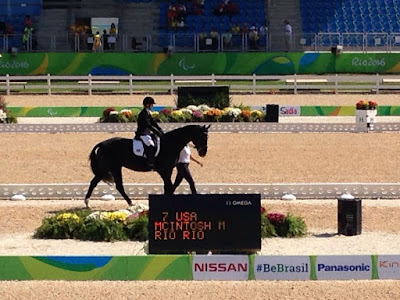 Two days later, Missy's great coaching experience led Rio and me to produce a solid first test at the Paralympic Games. I didn't ride till late in the afternoon on a very hot day, leaving too much time to ponder all aspects of this momentous occasion. Around noon, I had a total panic attack followed by an epiphany. I had already accomplished my goal in making it to the Paralympic Games. Suddenly calm, I resolved to just enjoy riding my horse and felt very confident walking around the outside of the competition ring with Missy, greeting the judges as we had done so many times before. I wasn't nervous at all and rode Rio in a consistent test with great halts and wonderful free walks for a respectable 68% despite the oppressive heat.

Preparing for my second test, the Individual Championship, to be held two days later, involved a slight change in strategy. In order to encourage Rio to show more forward energy, I rode her on a little longer rein. The coaches found her much improved in the subsequent test but from the judges' perspective, not enough to significantly impact her score. 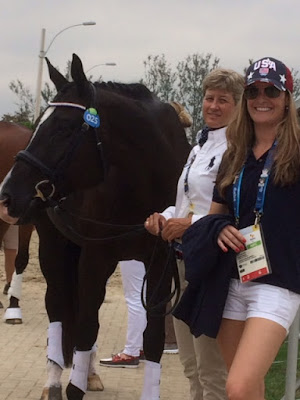 I enjoyed the support of a great team in Rio! Missy Ransehousen did double duty as groom and trainer, keeping Rio well fed and beautifully turned out as well as totally tuned up for competition. Alex Philpin was a great help, especially on competition days when time was a factor. Charlotte McIntosh Tarr, my daughter, was exceptional in her ability to keep me organized, hydrated and focused with energy and a sense of humor that benefitted the whole team. It was a delight to have her there! I was overwhelmed by the cheers and good wishes of my FaceBook friends. I'm so sorry that none of the live feeds panned out! 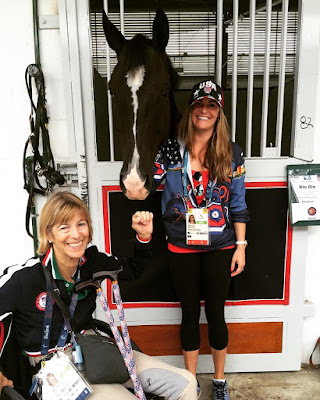 It is hard to capture the sense of cameraderie our group shared. Missy summed it up saying it was a "No drama" experience. There was mutual support from the team's actual moms sewing the Paralympic buttons on our show coats to our Personal Care Providers, Laureen Johnson and Tina Wentz jumping in to push our powerless power chairs when necessary. We all benefitted from the years of advanced planning, foresight and attention to detail by the USEF's Will Connell and Christy Baxter and the support of the USET Foundation. Duncan Peters and the grooms kept the horses remarkably happy and healthy. Our State Department liaison, Stacey Berg, instantly became part of the team, pushing wheelchairs and fetching dressage whips as well as ensuring our safety!

My fellow teammates, Becca Hart, Sydney Collier, Annie Peavy and Roxie Trunnell, as well as being serious competitors, contributed a lot of humor to their overarching team spirit.

I can't begin to thank Missy enough for her determination in making my dream come true. I am very appreciative of all the hours she and Jessica have spent whipping Rio and me into shape.  It was lovely to come home to the congratulations of all of you who have followed my quest for all these years! Thank you all! 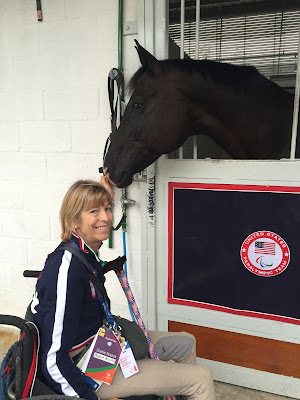