THEY'RE GOING TO RIO!!

Huge news out of the Blue Hill Farm camp, as we received word late yesterday that Gigi, Missy and Rio Rio are in fact heading to Rio!!!

As Gigi said today, my phone has been on fire.  We couldn't be any more proud of the entire team at Blue Hill Farm and to Gigi's extended support group who have worked to support them in their dream of going to the Paralympics.  It's game time!!


The following athlete-and-horse combinations will compose the Team (in alphabetical order): 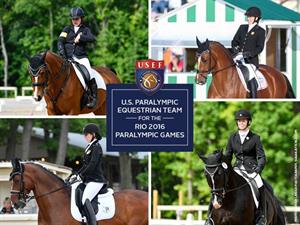 Further information regarding the U.S. Paralympic Equestrian Team selection process can be found on USEF.org. All nominations to the 2016 U.S. Paralympic Team are subject to approval by the United States Olympic Committee.

The USEF International High Performance Programs are generously supported by the USET Foundation, USOC, and USEF Sponsors and Members. Without the support of these organizations and individuals, it would not be possible to support U.S. athletes. The USEF is especially grateful to individuals who give generously of their time and money to support the equestrian teams.