Congratulations to Gigi McIntosh on the Purchase of Rio Rio!!

Missy and the team at Blue Hill Farm have been busy this year in their quest for 2 perfect Para mounts for Gigi McIntosh and Becca Hart.  The team has poured over multiple videos, reached out to trusted contacts within their equestrian network and wracked up some serious travel miles during the search.  It has not been an easy mission,  but we are now happy to announce that both Gigi and Becca have found their new competitive partners.......so let the training begin!!!

We're going to feature each of the ladies in a series of blogs about their new partnerships, in order to keep their supporters on top of their progress.

"The great horse search began in earnest last spring after Hope Hand declared a moratorium on re-cycled event horses as Para mounts! Missy, Becca and I met Babsi Neidhart-Clark and Martha Thomas in Denmark to begin our search for our new competition horses.  After a lot of driving and a lot of laughing, we found two lovely horses.  Persistence paid off as Becca's horse made it back to Blue Hill Farm eventually, but mine, sadly, did not pass the vet.

After enlisting the help of a wide network of astute friends and chasing down countless videos of possibilities, five months later,  I saw a video of Rio on Dressage Daily's Horse Market. Beautiful trot, purported "10" walk, 7 years old with a lifetime of show experience.....I was smitten.  So what if she was in Washington state?

Of course, Missy was a lot more skeptical!  We needed another extensive walk video. Her trainer complied forthwith. Then we sent Erin Albreda, a veteran Para equestrian who lives in Seattle, out to try her.  Erin sent a glowing report after trying her at the Regional championships.  Not only was she bomb-proof but very straightforward to ride.  By now, I was harassing Missy to fly to Seattle with me, tomorrow, as I was sure that the horse would be sold before we left Pennsylvania! (To her credit, Rio's trainer, Jessica Wisdom, never pressured us.)

We met up with Erin, near Seattle, on a very scenic tour of Washington and saw Rio, at last, and another beautiful mare.  We brought all that video home to show the final arbiter, Jessica.  The end result was Rio Rio arriving at Blue Hill two months after I sent her original video to Missy!

I am delighted to have such a lovely horse to ride at this time in my life!  Many thanks to the friends who sent me so many prospects, Babsi and Martha, and most of all to Missy and Jessica for whom the hard work has just begun!" 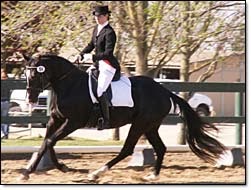 Here is a link to her information and young horse photos on the breeder's site.

I was able to watch a bit of Rio in action this week and thus far she is living up to all of her expectations.  She's remarkably quiet with a lovely walk and a big swinging trot.  Gigi claims that she's "so lazy I have to chase her with the whip", but this lovely black mare has plenty of stride and impressive movement.  We're very excited to watch this relationship grow, and since Rio is only 7, Gigi, Missy and Jessica clearly have plenty of opportunities to improve upon her natural talents before they leave for Florida this winter to hit the show circuit!

Stay tuned for regular updates and photos on this new relationship, and good luck to Gigi and Rio on their road to qualifying for the US Paralympic team!! 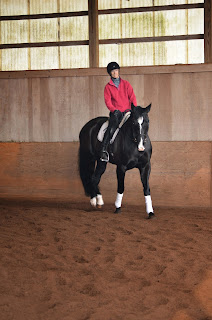