WE'RE PROUD OF OUR PARA RIDERS! 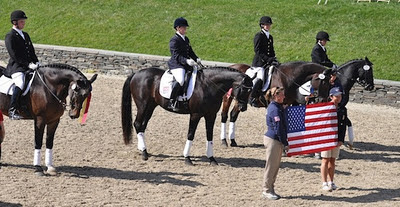 London, England - December 2, 2011 - Sales of Paralympic Equestrian tickets for the London 2012 Paralympic Games have broken records, with more than 40,000 tickets already sold. And there is a further opportunity for spectator numbers to increase with remaining tickets going on sale at 1pm GMT today (2 December).

The number of tickets sold to date for the 11 Paralympic Equestrian events taking place in Greenwich Park next year (30 August - 4 September) has already overtaken the previous record of 33,000 spectators that watched the Beijing 2008 Paralympic equestrian events in Hong Kong.

In total over one million tickets have already been purchased for the 20 sports at the London 2012 Paralympic Games since they went on sale this year.

"Greenwich is a large venue and we already have huge spectator numbers for Paralympic Equestrian. With further ticket sales expected over the coming days, we are pleased to say that we will be hosting the highest number of spectators ever to have watched Para-Equestrian at any Paralympic Games."
The remaining tickets for the 2012 Paralympic Equestrian events will be available on a first-come, first-served basis at www.tickets.london2012.com. For residents outside the UK, a full list of Authorized Ticket Resellers is also available on the London 2012 ticketing website.

"It is fantastic that 78 of our Para-Equestrian athletes will be competing in front of their biggest ever audience at the London 2012 Paralympic Games in the beautiful surroundings of Greenwich Park," said Trond Asmyr, FEI Director of Dressage and Para-Equestrian Dressage.

In 2006, the FEI became one of the first International Federations to govern and regulate a sport for disabled athletes when Para-Equestrian Dressage joined the ranks of the seven disciplines the FEI regulates.

Para-Equestrian Dressage is the only equestrian discipline that is included in the Paralympic Games, where it has been a regular fixture since Atlanta 1996.

The London 2012 Paralympic Games competition schedule and background on the Paralympic Equestrian events can be found here.

The USPEA is a network of riders, judges, national federation board members, and equestrian enthusiasts. The association gives athletes the ability to get involved and expand their knowledge and experience in the Para-Equestrian sport. The USPEA encourages para-athletes to participate in all disciplines under the para-equestrian umbrella.

The USPEA is a recognized affiliate of the United States Equestrian Federation (USEF) which serves as the National Governing Body for the equestrian sport. This relationship between the USPEA and USEF is to encourage para-equestrian competitors, leisure riders, coaches, fans and enthusiasts to network and get involved with the entire equestrian sport.

Ultimately the goal of the USPEA is to foster growth in the para-equestrian discipline. From growth in the number of participants to growth as a team, and growth in the experience and knowledge of all involved. From local horse shows to international Olympic Games, the USPEA will provide para-equestrians the knowledge of what they need to succeed. The USPEA connects with the International Olympic Committee (IOC), the Federation Equestre Internationale (FEI), the United States Dressage Federation (USDF), and USEF which provides Para-Equestrians the top equestrian resources.

In June 2010, the USPEA earned its 501 (c)(3) status which has encouraged supporters to help supply funding to the Para-Equestrian Team as a recognized affiliate of the United States Equestrian Federation(USEF).

For more information about the USPEA please visit www.USPEA.org or contact USPEA President: Hope Hand by e-mail: Wheeler966@aol.com or by phone: (610)356-6481.

To view an online version of this press release please visit: http://uspea.org/?p=23
Posted by Lisa Thomas at 4:32 PM