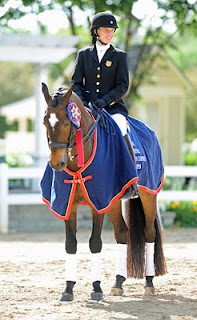 Rewritten with Permission of the Chronicle of the Horse June 27, 2010

She placed first and second in the Para-Equestrian Selection Trials to put her in a strong position for the U.S. team for the Alltech FEI World Equestrian Games.

“I was really happy with him because it’s a relatively new ride,” Hart said of Kerri Sower’s Kazan. “It was only the second time we did our freestyle. The music suits him so well—it’s dainty, it’s jumpy and it’s nice.”

Norteassa, Hart’s partner of almost eight years, was reserve champion in the Para-Equestrian National Championship on 69.01 percent and second in the freestyle for Grade I, II and III riders on 72.50 percent.

“He was just kind of consistent and went in and did what he needed to do,” Hart said.

Next Hart, 25, will head back to trainer and Para-Equestrian coach Missy Ransehousen’s farm in Unionville, Pa., for additional training before the WEG.

“Missy has been fabulous, just getting the conditioning and working on getting them both ready to go through an entire week like this,” Hart said. “These can be incredibly grueling and long weeks, especially when it’s hot and humid like this.”

“The walk was really good,” Brueckmann said of her freestyle ride. “I had some trouble with the changes, and that was my fault—I needed to have set him up better. We went out back in the warm-up, and it was all wonderful, so it’s only going to get better from here.”

“[The music] is light and airy and fluffy and elegant, and so is he,” Brueckmann said of Raison D’Etre. “It’s really good music for him.”

The official list of team members and individual competitors for the World Equestrian Games will be released in approximately four to six weeks. There are four team spots and six individual spots available. The first seven will likely be filled from the top seven finishers in the National Championships, and the others are left up to the discretion of the selectors.

Results for the 2010 Para-Equestrian National Championships
Posted by Lisa Thomas at 9:32 AM